Matches: Portugal vs Netherlands; Germany vs Denmark Germany needed at least a draw to ensure progression, while the other three teams would have ideally liked to win their games in order to progress into the knockout rounds. This is the Group Of Death and with situations like this, you best believe that these matches would be full of drama and goals. Final scores: Germany 2-1 Denmark; Portugal 2-1 Netherlands (therefore, Germany and Portugal progress) 1. Ronaldo Turns Up When Necessary 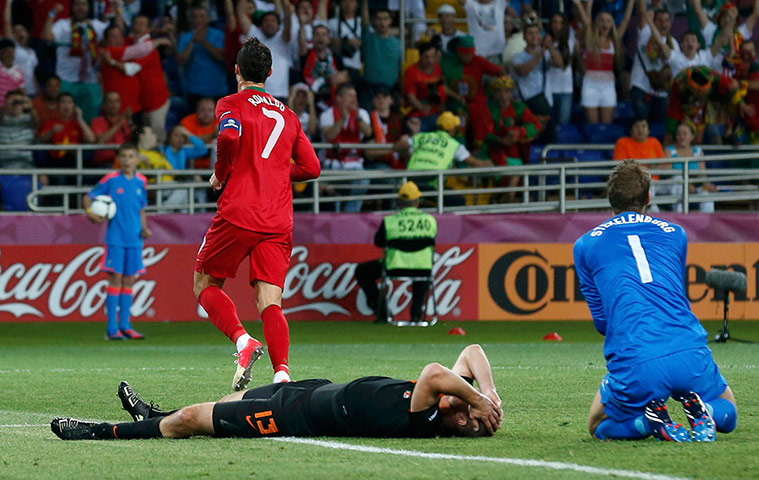 Lauded by critics after having a poor performance against Denmark a few days ago and been taunted by Messi chants from opposing  fans, Ronaldo was hell-bent on playing brilliantly tonight and that's exactly what he did. He scored the equalising goal in the first half, then was calm and composed to bag a 2nd goal for Portugal, which turned out to be the winning goal. He came close to scoring the first hat-trick of the tournament towards the end of the game, but only hitting the woodwork for the 2nd time in the match. Ronaldo now has the confidence to lead Portugal to victory in the knockout stages.

Zero points from the World Cup runners-up. Came into the tournament with a strong record behind them and now leave the tournament with a woeful performance on their minds. Many chances wasted (especially in the game against Denmark), the team not clicking at all and egotistical tantrums from some players (Robben, I’m looking at you) have been the downfall of this side. The Dutch need to take this performance on the chin and start preparing for the World Cup where they will have to rebuild a name for themselves.

3. Germany Beast Their Way Through

On the opposite end of the spectrum (or table, if you want to be technical), Germany have accumulated the maximum 9 points from the group by beating all three teams. It was not even a remotely easy group either, so maybe they have become favourites to win this tournament. Podolski also deserves a mention after scoring on his 100th international appearance for Germany, which was instrumental in confirming their progression to the last 8 against Greece. He will be remembering this day for year to come.

If you predicted this, then you’re either a liar or practice voodoo

Honestly, who would have predicted this? Everyone expected this group to live up to its name by being entertaining and tough, but I highly doubt anyone predicted Netherlands to exit in such a fashion with zero points (except for palm readers and witch-doctors). With the format of the Euro Finals being altered in order to accommodate an extra 8 teams to make a total of 24 teams, I still hope that another Group of Death will be drawn for us fans to enjoy.

Portugal vs Czech Republic will show two attacking sides go at it with each other. While Portugal are favourites to win the game, their defence needs to be on top form, while their attack not complacent at all. Petr Cech will have to ensure that he has a solid performance between the sticks, something he has struggled to display so far during the tournament.

Germany vs Greece. Angela Merkel will be happy to see this game. Both teams not only are located on different ends of the spectrum in terms of strength in the Eurozone, but also in terms of style of play. Germany will be typical and throw as many players forward to attack, while Greece are more likely to play on the counter and try to score via set pieces. Either way, it will either be an exciting game, or really dull. I hope that it’s the former.