Spain's first game saw a draw between them and Italy, while Ireland were looking to recover from a 3-1 defeat against Croatia. Ireland were left disappointed however, after suffering a 4-0 defeat to the European and World Champions Spain: 2 goals coming from Torres, a calmly taken goal by David Silva and a brilliant strike by the substitute Cesc Fabregas. 1. Torres Silences His Critics 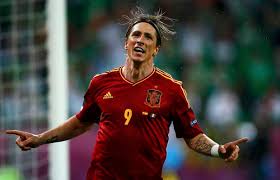 Torres celebrates a goal against Ireland

It was bound to happen. Fernando Torres who has received a lot of criticism for the past 18 months scored not only once, but twice during the match against Ireland. It may be too early to say that he is back, but he is showing promising signs that he is gaining more confidence, not only from his goals but also from his contribution during the game by making passing and getting into threatening positions. Cynics will probably say "it was not against tough opposition", but if he didn't score, these same people will say "he couldn't do it against weak opposition". There's no pleasing some critics, be happy for the lad and hope to see similar (or even better) performances from him in the next few games.

2. Ireland Fans Are A Passionate Bunch…

Singing your heart out when your team is 4-0 down is proof that Irish fans are very passionate about their team. Most fans would have left the stadium around the 75 minute mark, but their voices echoed around the stadium. They came in packs and wanted to make their presence known, regardless of the scoreline.

3. … But Passion Alone Won’t Get You Through

England take note. It’s the sad truth, unfortunately. Ireland have lost both of their games and are therefore knocked out of the competition, with Italy (who need a win in order to advance) left to play. In all honesty, they were the underdogs in the Group (Of Debt) so they weren’t expected to even get a point in some cases. However, they will want to give Italy the match of their lives as a way of further display the passion that they have shown during the two matches they have played in this tournament.

4. Shay Given Needs To Shoulder Some Of The Blame

Throwing in the towel?

There’s a rumour that he was a potential doubt for the tournament due to an injury, so if this is true then maybe he can be excuse. If not, then Given must shoulder some of the blame for some of the goals. Similar to Petr Cech conceding a few soft goals, most of the goals that Ireland conceded could have been saved by Given, two being against Croatia and three being against Spain. A notable example was in this match, where his attempt to the punch the ball out was poor, falling to David Silva who literally rolled the ball past him (or underneath his hand). He did, however, pull of this spectacular save during the game.

5. Spain’s Next Game Won’t Be Easy

A point will be too risky for the Croatians

A draw for Croatia may not be enough to progress through to the knockout stages if Italy grab a win by a 3 goal margin. That being said, Spain will need to prepare for the possibility that Croatia will go all out with their attack. Spain have the incentive to draw the game, but a loss is a definite no just incase Italy pull off a win against Ireland. The last round of the group will be one to watch, don’t miss it!