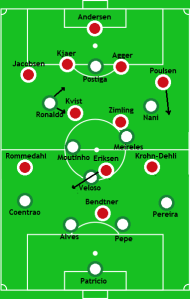 The second round of Group B games got underway in Lviv with surprise Dutch defeaters Denmark taking on a Portugal side feeling the pressure after their narrow loss to Germany. Bento’s boys took an early 2 goal lead but Bendtner’s brace brought things level, a fierce late finish from Varela eventually separated the sides giving Portugal a 3-2 win. Here’s a look at some of the features of the game. Danes stay true Speaking in the run up to this fixture, Danish manager Morten Olsen admitted his team were fortunate in their win over the Netherlands but revealed he’d be setting them up in the same way. Staying true to this, we saw the same starting XI and attitude from the outset. Whilst they didn’t really threaten to score, they were arguably the better side in the opening minutes.

Against Germany, Portugal’s threat came from hitting on the counter and through set pieces. With the Danes working hard to get back and defend in numbers when without the ball – particularly the wide men Krohn-Dehli and Rommedahl seemed deeper than they played against Holland – it was the latter option, set pieces, which provided Portugal’s main threat and eventual breakthrough. Pepe, took advantage of some poor marking and fired Portugal ahead with a near post header from a Moutinho corner.

Danger on the wings

Having taken the lead, Portugal seemed more comfortable high up; finding space as the Danes committed men forward. With a lack of creativity in the middle, they posed most danger in possession from the wide areas; Ronaldo’s movement inside and running at the defence caused issues from the left and Nani’s crossing troubled the Danes on the right. In threading a smart ball through to Postiga at the near post, Nani was crucial in the second Portuguese goal.

After the nature of their win over the Netherlands, questions were raised about the Danes’ ability to come from behind. In conceding a second, Denmark looked all but buried, but Bendtner brought them back in contention; putting the finishing touch on a wonderful team move. Both that goal and his second followed the trend of the tournament so far, coming from his head.

Despite looking one of the brighter players in the early minutes of the game, Ronaldo gave a poor performance, missing 2 glorious opportunities in the second half in a very uncharacteristic manner. His lack of defensive contribution was also a major factor in the Danish equalizer as he consistently left Jacobsen to roam forward freely which eventually resulted in the cross for the goal. Varela’s late strike will perhaps save Ronaldo’s embarrassment for now, but he’ll no doubt be feeling even greater pressure to deliver in their decisive match against the Dutch.