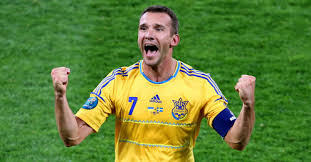 The evening game saw co-hosts Ukraine and the collectiveness (plus one non-conformist: Zlatan Ibrahimovic) of Sweden finish the first round of group fixtures. If you watched the match on the BBC - and the TV-punching analysis in particular - one would have thought it was a play-off of which country England will fear less. (The overall conclusion from the workaday pundits was that England had nothing to fear.) In accordance with the tournament so far, despite a slow opening half an hour, the match did not disappoint as the co-hosts came from a goal behind to record a 2-1 win. Sweden absorb early pressure The Swedes were reticent from the start, happy to sit back and absorb the host-powered pressure. It was a sensible approach – after all, hosts nations tend to begin matches very frantically with the fresh joie de vivre of the crowd urging them on, as we witnessed in the Poland v Greece game. The problem was that there wasn’t much to absorb as Ukraine took time to fully find their stride.

In an age where international teams understandably lack the coherency of club teams, an arguably essential ingredient of a successful international team is one that is formed predominantly around two club-sides i.e. Egypt from 2006-2010 were formed of mainly Al Ahly-Zamalek, with Spain its Real Madrid-Barcelona, etc. There is a strong base of Dynamo Kiev and Shakhtar Donetsk in the Ukraine squad. It also helps that a similar-ish team has been playing for Ukraine over the last few years, adding to their sense of familiarity and fluency. The Dynamo Kiev connection was vital in the Shevchenko equaliser as club team-mate Yarmolenko whipped the ball into an area where the striker thrives on. Their passing moves in general looked precise with the understanding of movement of each player in the team. This is an extremely important strength which could see the co-hosts dismantle France and/or England.

Wingers the key to success

Whilst Andriy Voronin looked a perplexing paradox of the player we saw in a Liverpool jersey, two of the shining lights were the young wingers – Andriy Yarmolenko and Yevhen Konopylanka. With their blend of pace and trickery, they look set to give any full-back who isn’t solid a bout of insomnia for a few nights. I first set my eyes on the former in the Europa League and although the tag of ‘Next Shevchenko’ seems ridiculous hyperbole in terms of their style of play, I would wager that he is one of the best young players in Europe and if Ukraine are to have any success his form is key.

Is the time up for Sweden?

Ukraine coachh Oleg Blokhin stated that the time would be up for whichever team lost on the night. Is the time up for the Swedes? It aint over ‘til it’s over, but the match against England is a must-win game for them now. It’ll be a tough ask and they’ll have to play the expansive football that they played during qualification. For what it’s worth, there were some encouraging signs tonight – Ibrahimovic performed admirably and when they were in need of an equaliser late on in the game there was real urgency. With Johan Elmander returning from injury with a short run-out and the deployment of Rasmus Elm back out wide, not all is lost but it will be tough.

How far can Ukraine go?

Very far. The power of the home crowd can elevate poor teams to average teams, average teams to good teams, good teams to very good teams…you get the gist. This Ukraine team lies somewhere between average and good. Their cohesiveness as a unit is a major strength and they’re certainly better than England in that sense. In France, they’ll face a good team and that’ll be a better test of their capabilities. In England, they’ll face a team that has had haphazard preparations and will be playing proactively, although Wayne Rooney should be back. Still, with the power of the home crowd behind them I fancy them to reach at least the quarter-finals – their official target.