Matches: Spain vs Italy; Ireland vs Croatia Today's two matches saw the four Group C teams pitted against each other. Could have potentially been dubbed the "Group of Debt" if Greece were in instead of Croatia, but alas it is still a solid group that produced two very decent games. 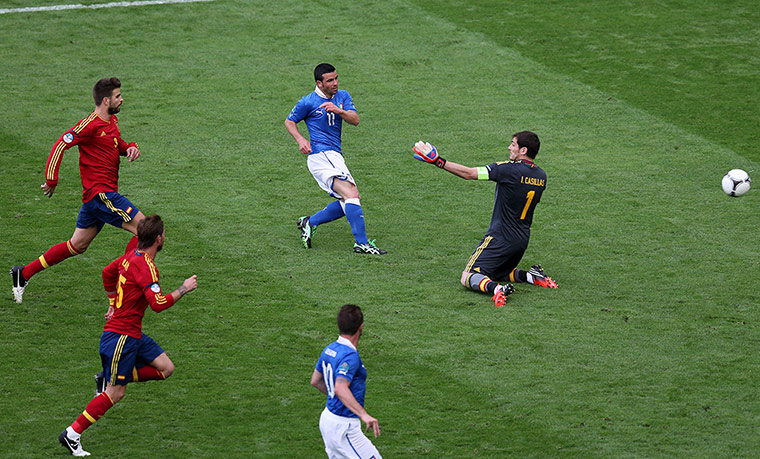 Spain decides to opt for six midfielders in the game with no strikers, while Italy played a 3-5-2 formation. This game literally had me screaming "SHOOT" at my TV, but it was pretty exciting at the same time. The first half comprised off a lot of tiki-taka from the Spanish side, but with no end product on numerous occasions. Andres Iniesta was no doubt the most prominent figure for the side in the first half, getting into brilliant scoring positions but didn't manage to score. The Italians were brilliant in the first half with their 3-5-2 formation, defending excellently but also attacking with some force,  prompting numerous saves from Iker Casillas who was arguably the busier keeper in the first half.

The last 45 minutes of the game was exponentially better than the first. Iniesta began the match by continuing his positive contribution to the game, but to no avail. Mario Balotelli, one of our players to watch during the tournament, was absolutely frustrating: firstly by picking up a needless yellow card, then spending way too long on the ball instead of shooting or laying off Cassano to open the scoring. His poor performance (which also consisted of giving the ball away on numerous occasions) resulted in Antonio Di Natale coming on to replace him, with the substitute making an instant impact by getting behind the Spanish defence and slotting the ball into the back of the net, putting the Blues 1-0. The Champions, however, responded almost immediately through a Cesc Fabregas goal, leveling the score at 1-1. The Spanish then finally brought a striker on in the form of Fernando Torres. It was a disappointing performance from the lad: first being able to get around the experienced Buffon after running clear through;  picking up a yellow card after a poorly timed tackled; and then attempting a chip that just went over the bar. Poor passes were also an aspect of his game. It was a very interesting 2nd half, with both of the group favourites picking up a draw in the end.

Ireland goalkeeper shows his disappointment after their 3-1 defeat

Irish supporters came as a solid unit to the match, their singing echoed through the whole stadium during their national anthem. It was Ireland’s first tournament in 10 years since the 2002 World Cup and they were ready to play their hearts out against a solid Croatian side.

The first half started off with an early goal from Croatian striker Mario Mandžukić who managed to get his head onto the ball and guide it into the net past a wrong-footed Shay Given, a soft goal to concede in some sense. Ireland were in no mood to let it slide, winning a controversial free-kick and guiding it onto the head of Sean St Ledger who brought the score back to 1-1. Ireland continued to apply pressure on the Croatians until Everton and Croatia’s Nikica Jelavić netted a poacher-like goal after Ireland failed to clear the ball out of the area, allowing Croatia to finish the half leading 2-1.

The second half was not as exciting as the first, but it was more physical. Mandžukić managed to net his 2nd header of the game, putting the Croatians 3-1. Ireland had numerous penalty appeals, when Keane went down in the box but the ref waved play on. Despite many attempts to try and score, Ireland didn’t manage it, with numerous just going wide of the post. Croatia managed to hold onto the game, winning 3-1. The Irish have the World Champions next, not too difficult, right?