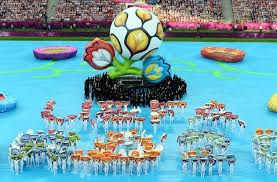 The Opening Ceremony: beautiful, ain't it?

The opening games of the tournament were played by the 4 teams in Group A: Greece, Poland, Russia and Czech Republic. It was a brilliant tournament opening full of clumsiness, card-happy refereeing, attacking football and seven goals in total.

A massive piano, colourful dancers, a DJ, more colourful dancers and a massive inflatable Euro 2012 logo. Doesn't sound like your typical opening ceremony, right? Poland wanted to try something new for the tournament opening and, coming from someone who just wants the tournament to get underway and save the dancing for later, the ceremony wasn't too bad. It was pretty humorous seeing what seemed to be a piano turn into a DJ booth, with the DJ showing off some really great dance moves.

On paper, I guess most people would have though “what kind of opening game is this?” or “Greece don’t attack and I doubt Poland will too”. Well, it was one hell of an opening game, full of drama, red cards and wasted opportunities. Greece were even on the offensive at times, dismissing all negative things said about them prior to the game.

The game began with Greece kicking off. The moment this happened, the echoes of booing traveled around the stadium by Polish fans towards the Greek, providing a hostile atmosphere for the visitors. Poland started the game off positively and eventually found the net via a header by their star player, Robert Lewandowski. The stadium erupted and the fans of the host nation were going mental. Things got even worse for the Greek’s when Avraam Papadopoulos picked up an injury and was replaced by Kyriakos Papadopoulos. Poland were even more happy to see the Greek player Sokratis Papastathopoulos sent off by Spanish referee Carlos Velasco Carballo after picking up two yellow cards, both cards were given in a controversial manner.

Most people would have written Greece off at this point: a man down and a goal down to the co-hosts, not helped by the fact that they are known for their defensive approach. However, a brilliant halftime substitution by the Greece manager bringing on Dimitris Salpingidis to replace Ninis paid dividends, as the substitute latched onto a loose ball to equalise. Greece did not park the bus there, as they continued to attack which eventually led to Poland and Arsenal goalkeeper Wojciech Szczęsny to get sent off. He was replaced by Przemysław Tytoń, who saved the subsequent penalty to keep Poland in the game. Dimitris Salpingidis thought he had put Greece 2-1 up, only to realise that his goal was disallowed for offside.

The second game of the tournament between two teams with a bit of history. The group favourites were expected to do well in this game and did so.

The first half consisted of Russia cutting open the Czech Republic’s defence on numerous occasions. Their persistence eventually paid off when Aleksandr Kerzhakov’s header hit the post, only falling for Alan Dzagoev to smash the ball into the net, putting Russia 1-0 up. Dzagoev had another opportunity only 3 minutes later, but completely messing up the chance. That didn’t matter too much though, as Russia split the defence open again, allowing Roman Shirokov to cleanly break through and chip the ball over Petr Cech, ending the half with Russia being 2-0 up.

Czech Republic were more alive in the 2nd half and managed to drag a goal back by the 51 minute mark. Jaroslav Plašil played a beautiful pass to Václav Pilař, who rounded the Russia goalkeeper Malafeev and brought the Czech’s back into the game at 2-1. That didn’t matter too much though, as Dzagoev bagged his 2nd goal of the game, putting Russia 3-1 up. Roman Pavlyuchenko, who replaced the wasteful Aleksandr Kerzhakov, contributed further to the Czech’s (and Cech’s) misery by adding to the scoreline, making it 4-1.