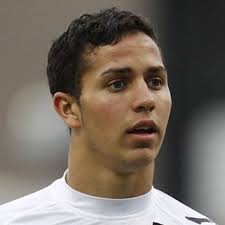 Born in Austria, Kerim Frei is of Moroccan and Turkish heritage, although has chosen to represent his country of birth on an international level. Initially beginning his career at Austrian team Grasshopper, Fulham scouts had spotted his talent and signed him to their youth team in 2010. Funnily enough, he had made his Europa League debut (playing 18 minutes in the 0-0 draw against Faroe Islands team NSI Ruvanik) before his Premier League debut (in the 2-0 defeat to Swansea).

As of late, he has been involved in both first team and youth team games for Fulham. Frei made 11 starts in the 2011-2012 Reserve League, scoring 5 times and managing 3 assists. Not too shabby for a young player making 11 starts. He made 16 starts for the first team in the same season in the Premier League, with 10 of them being substitute appearances. Excluding reserve games, he has accumulated 1126 minutes of playing time for the West London club, his most notable match was delivering an excellent performance in the 1-1 West London Derby draw against Chelsea on the 9th April 2012. Sandals For Goalposts writersexpect him to amass a lot more minutes next season, whether it is for Fulham or on loan to another club (preferably another Premier League team).

Quick, skillful and a neat finisher: Frei has the potential to become a great midfielder. His vision isn’t half bad either and he will become an integral member for both Fulham and Switzerland within the next few years if he keeps up the good work.

Naivety is a usual problem associated with younger players, although he should grow out of it and develop mentally once he gets a few games under his belt. Strength may be a slight problem when facing powerful defenders and deep-lying midfielders, but his pace should be good enough to make up for this weakness.