The unmissable friendly. So, yes, you shouldn't miss this, even though it's a friendly. Chile v Ghana, La Roja v The Black Stars. It's on  at 23:59 GMT on Wednesday and it's being played in New Jersey, USA, of all places - a fantastic money-spinner, obviously. Here is the half-ramble, half-preview of it: Teams often reflect the personality of their manager. And few teams in world football reflect the personality of their manager better than the current Chile national team. Their manager, Claudio Borghi, is a pure idealist, totally committed to playing pure, attacking, gung-ho football, a non-conformist in a managerial world of conformists. “I don’t like talking about players who are ‘versatile’,” he once said. “In my opinion, someone who’s versatile plays badly in every position.” His carefree stance goes hand in hand with his aura, the aura of the loveable uncle, who is perhaps slightly dodgy, but loveable because he doesn’t take life too seriously. With his companionable figure, you can imagine a handful of nieces and nephews jumping at him for a hug. Borghi looks just like your favourite uncle. 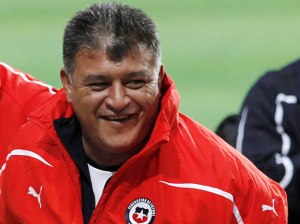 “In football you can’t wait until you’ve conceded a goal before you start taking the game to the opposition,” Borghi once proclaimed, analogising his philosophy.” It’s like with women: if you go to a disco and see a stunning blonde you have to go after her, you can’t just wait until the end of the night or for the disco to close.” Indeed, having been an avid watcher of Chile during their 2014 World Cup qualification efforts thus far, I can testify that during their games they treat the pitch like a disco and go after the blondes from the start.

The blueprint of the Chile attacking philosophy stems from the eccentric predecessor Marcelo Bielsa, of course, who oversaw the rise of Chilean football, leading them to their first World Cup in 12 years and then enchanting global audiences at the tournament with flowing, unrelenting attacking football. Under his tutelage, Chilean football had achieved a real sense of identity, the team playing with never-ending energy and a youthful joy. When Bielsa left in February 2011, the Chilean FA sought to appoint a manager who was of similar philosophy to him and that man was Borghi, another Argentine.

Under Borghi, then, the Bielsa legacy has continued (with Borghi well aboard the ‘if it aint broke don’t fix it’ mantra), the 3-3-1-3 system is king, the relentless pressing still engrossing to watch, the energy of the wing-backs fascinating and the interchanging of wingers and attacking midfielders enthralling. The major difference, though, is La Roja have perhaps become even more cavalier, an approach that can at times be catastrophic, particularly well-disciplined teams. Indeed, in a qualifying match against Argentina last year, Borghi chose two attacking-midfielders with limited defensive capabilities in a three-man midfield. They were duly thrashed 5-2.

But that is Borghi’s way. He has publically stated that he would rather lose than win ugly – the quality that football commentators like to say is the ‘mark of champions’. Borghi isn’t interested in winning ugly; he puts out teams he’d like to watch and teams you and I won’t feel like we’ve wasted 90 minutes of our lives watching. It can go spectacularly wrong, but it’s fun, one way or another. Chile are not world-beaters by any stretch, their defence can be shockingly amateurish and each free-kick lofted into their penalty box is an eye-closing experience – mainly due to the diminutive stature of their players – but their tendency to entertain is admirable. Anyone who has a spare 90 minutes should watch Chile, they care about you and want to entertain you.

So who do Chile have? Well, they have Alexis Sanchez. But you probably know a lot about Alexis Sanchez so I’m not going to tell you any more about him. They have other good players

Eduardo Vargas – Now at Napoli, he was the star of Universidad de Chile’s 36-game unbeaten run that saw them win the Copa Sudamericana (South American equivalent of the Europa League) and a Chilean league title.  He has been described as a more direct version of Alexis Sanchez. Although he possesses blistering pace and spends the majority of his time on the wing, he has a tendency to drift centrally and play on the shoulder of the last defender and, when given a chance, his finishing is that of a real striker.

Gary Medel – Chilean Football of the Year in 2008, Medel is an upstanding member of Chile’s all-action, relentless, combative pressing on the opposition. A protean member of the team, he’s equally comfortable anywhere in defence but we see the best of him as a defensive midfielder as he hurries and forces the opposition into mistakes or fouls to disrupt their rhythm.

Matias Fernandez – Arguably the easiest player to watch on the eye, perhaps even more than Alexis Sanchez. Despite inconsistency at club level, Fernandez is the creative heartbeat of this Chile team, gliding past defenders with ease and supplies the balls other players would struggle to spot to the wingers and the robust striker Humberto Suazo.

Cristobal Jorquera – Jorquera has been earmarked as the successor of the dazzling Jorge ‘El Mago’ Valdivia (a truly remarkable player who you won’t be seeing as he has been banned for breaking a curfew). Nicknamed El Nino Vertical for his directness, his sublime shots, especially just outside the box, are dispatched with pinpoint accuracy, usually to the top corners of the goal.

Marcelo Diaz – Seen as South America’s answer to Xavi, Diaz also starred in Universidad de Chile’s triumphant season, providing protection for his club side’s back three and establishing control in midfield with his composure and poise on the ball when they were under pressure. Some would argue that he is a deep-lying midfielder, or regista, that Chile are in dire need of but who may disrupt the frantic style of the team.

Ghana can learn from Chile

If there is one side that can learn from Chile – at least in the sense of asserting themselves on the opposition – then it’s Ghana. The Black Stars were ultimately knocked out of the Cup of Nations because of their wastefulness in front of goal, yet their inability to assert themselves on the opposition remains a real problem. The pressure is on Ghana coach Goran Stevanovic after they were knocked in the semi-finals of the Cup of Nations, which was undoubtedly a failure – taking into consideration the nations which were absent from the tournament. In a leaked report on the nation’s failings at the 2012 Cup of Nations, Stevanovic claimed that some members of the Ghana squad had been using witchcraft against their own team-mates. Last week, he was intensely grilled by the Ghanaian press in his first press conference since the Cup of Nations failure and the Ghana FA have are assessing what went wrong before making a decision on his future.

The Serb stated that if he was to do the Cup of Nations all over again he would take a younger team. However, this was another bizarre statement to make as the Ghana squad was the youngest squad at the Cup of Nations. Anyhow, the 18-man squad has a youthful presence in it, perhaps more so, with nine of the twenty-three players in the Cup of Nations squad not included – some are injured, some are retired and some are presumably not picked for their witchcraft efforts. Palermo’s Afriyie Acquah, who is uncapped, is included, as is Chicago Fire’s forward Dominic Oduro and they are joined by the uncapped forward duo of Emmanuel Baffour and Richard Mpong, who ply their trade in Ghana.

Tactically, it will be interesting how Ghana cope without Asamoah Gyan, who recently  announced his temporary retirement/break from international football. The striker has mastered the lone-man system, galloping after the lost causes, bringing the likes of Andre Ayew and Kwadwo Asamoah into play and, more importantly, scoring goals. In the 3rd/ 4th place play-off at the Cup of Nations, we saw a glimpse of what life without Gyan would be like: disjointed. Stevanovic played a 4-6-0 system, or something like that, there was no recognised striker and they looked more disjointed than I had ever seen them. The failure was apparent and striker Prince Tagoe was brought on before the first half had finished. The emergence of Jordan Ayew at the Cup of Nations was a major positive but whether he, or any of the other strikers, can shoulder the goalscoring burden – or the void left by Asamoah Gyan –  is another matter. And the fact that neither Ayew brothers have both been withdrawn by their club, Olympique Marseilles, because of injuries to them makes this friendly seem a bit of  a pointless exercise.