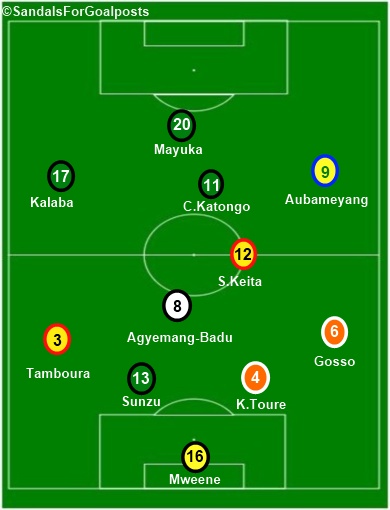 The excellent performers from the greatest tournament of all-time, ladies and gentlemen: Kennedy Mweene (Zambia) Although he was one of the most eccentric goalkeepers at the tournament, Mweene was – paradoxically – a calming presence to his team-mates, his confidence unflappable even when he flapped at crosses or had nervy moments. He was brave when he came out to collect or punch balls which were lofted into the box and his distribution was one of the best in the tournament. Jean-Jacques Gosso (Ivory Coast) Coming into the tournament, Gosso was barely a kitchen appliance name in an Ivory Coast squad filled with household names. Usually a defensive midfielder, he was deployed as a makeshift right-back due to fitness concerns over Emmanuel Eboue. It’s easy to understand why he was deployed there - his combative style often saw him come out on top in one-on-one duels and he joined in the Elephants’ attacks with forward runs of sheer doggedness, even though, understandably, his positioning was questionable.

Part of Ivory Coast’s ‘Golden Generation’ who yet again failed to deliver, the Man City centre-back was an ever-present next to partner Sol Bamba throughout the tournament and rarely put a foot wrong. His superb reading of the game and all-round defending was a large part of why Ivory Coast didn’t concede a single goal during the tournament.

Strong in the air, quick across the ground, Sunzu was the defensive lynchpin for Zambia despite only being 21. One of the standout performers in the final, he made several crucial interceptions with his good penalty-box positioning, marshalling Didier Drogba out of the game as he also matched him for strength. It was fitting that it was he that went on to score the winning penalty.

Solid defensively and with a habit for marauding forward, the left-back was a useful outlet in a plucky Mali side which finished in 3rd place. An example of this was for Mali’s second goal against Ghana in the 3rd/4th  place play-off; with lofty centre-forward Cheick Diabate not being able to be played in because he was in an offside position, Tamboura rampaged down the left-wing and a through ball found him, he ran onto the ball and he squared a low cross into the box which Diabate dispatched.

As well as scoring a beautifully-driven volley against Guinea that was one of the goals of the tournament, Badu snapped into challenges and drove the team forward with energy and power. The Udinese man’s driving force was badly missed when Ghana were knocked out by Zambia in the semi-finals.

Wearing the sandals of experience in a youthful Mali side, Keita showed the poise and guile in possession that has become synonymous with the tika-taka of his club team Barcelona (and the Spanish national team). Composed, calm and intelligent, he was the metronomic heartbeat of the Mali side, glittering the Cup of Nations with Barca DNA as he treated the ball like a prize assett, rarely giving the ball away. At times, it even seemed the Barca DNA had been given to his team-mates.

The twinkle-toed TP Mazembe winger was arguably the player of the tournament, always looking threatening even against the most sturdy, well-drilled defences with his instant control and staggering flair on the ball. At times his tricks and flicks were even needless, but he is a throwback to the instinctive African players of yestryear and it sure made for fantastic entertainment. While Katongo faded in the knockout stages, Kalaba was still impressive, giving defenders years of insomnia and blood which will forever be twisted.

Even though he will be remembered for the tears he shed after his penalty-shootout miss that sent Gabon out, Aubameyang played a herculean, mythical role in shouldering the host nation’s hopes. His combination of blistering pace and strong-willed drive brought fears into defemders and inspired his team-mates whether he played as a lone striker or on the right wing. His magnum opus combining all that was good about him came in the second half against Morocco, the finest individual performance of the tournament.

The fiery and lively Chipolopolo captain was the CAF Player of the Tournament. He made some key contributions earlier in the tournament; a glorious through-ball when playing as an attacking midfielder to punish Senegal’s lottery high-line, a key header to equalise against Libya in difficult wet conditions and a wonderful solo effort against Equatorial Guinea; a low shot after cutting inside horizontally from the left. He played a mythical role, his white boots dotting all over the turf, his performances committed and, due to his fiery nature, always on the edge,

At only 21, Mayuka finally announced his arrival on the world stage after showing promise at club level and impressing at the U-20 World Cup in 2007. Often berated by coach Herve Renard for not getting back onside quick enough (shouts of “MAYUUUUUUUUUUUUKAAAA!” were ubiquitous when Zambia played), the Young Boys striker worked the channels well, brought team-mates into play with his mature, efficient use of the ball and finished as joint top scorer with 3 goals. He provided moments of sheer quality – a delicious, surgically placed winner against Ghana in the semi-final and showing wonderful technique to guide the ball into the net against Libya with the ball lofting over his head.