We all know Demba Ba, Andre Ayew, Asamoah Gyan, Didier Drogba and Yaya Toure are potential stars of the upcoming tournament. We’re not here to tell you things that you know, we’re here to tell you things that will make you navigate away from this page with rich footballing knowledge. So we’ve picked out a few names, most of these players have a hint of obscurity but they could very well be the stars of the tournament. Thank us later.

This season Udinese have only conceded 11 goals – the best defensive record in Serie A and Benatia has been a vital part of that, starting 15 games out of their 17 games. He is arguably Morocco’s finest defender since Noureddine Naybet. Although he is not as rough-edged as his compatriot – and has a long way to go to match his achievements – he is assured on the ball, clean in the tackle and has an excellent reading of the game. He has recently been nominated for the Serie A Oscar del Calcio award in the Defender of the Year category.

Being the son of a legendary footballer is normally a curse; just ask Jordi Cruyff or…Stephen Clemence. Pierre-Emerick Aubameyang’s father, Pierre-Francois, was a legendary Gabonese defender,  is the chief scout for Italian giants AC Milan and he took full advantage of his job by taking his sons Pierre-Emmerick and Willy with him, although they were both eventually offloaded.

While Willy and Catilina (another Aubameyang) were dropped from the provisional squad, Pierre-Emerick has made the squad and it’s easy to understand why. Now at St Etienne, he has finally shown signs of blossoming, scoring 6 goals and providing 6 assists where he has played as a striker and as a right-midfielder for Les Verts. Pacey, good in the air and always willing to try a through ball, Pierre-Emmerick could well take some of the pressure off talisman Daniel Cousin or provide much-needed creativity. 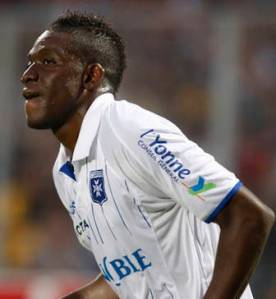 Auxerre are a side famous for drawing more than Rolf Harris, with 19 draws in the 2010/2011 season. But Traore has been on a quest to decrease the number of draws this season. The Burkina Faso man has been among the most consistent players of Ligue 1 thus far, at one point the joint-top scorer in Ligue 1 with 6 goals. A left-footed attacking midfielder with the finishing and calmness of a seasoned striker, he has scored 7 goals in 17 games this season – more than a quarter of the number of goals Auxerre have scored in total this season. He has also been used on the left wing and in central midfield. His contribution has also been vital at international level in with 4 goals in 6 games during qualification, taking goalscoring pressure off Moumouni Dagano for Burkina Faso.

The young Zambian has been touted as one of the best African prospects for quite some time now since his exploits at the FIFA U-20 World Cup in 2007, and he continues to showcase what he is capable of at club level, making encouraging progress. It only appears a matter of when before Mayuka leaves Young Boys as he sits 2nd in the Swiss league goalscoring charts with 7 goals in 16 games.

Blessed with pace, power and trickery, his finishing and overall game has room for improvement but he uses the ball efficiently and is capable of playing the lone-striker role in a mature manner that belies his age, often playing with his back to goal and bringing midfielders into play.

Even the most obsessed football fan wouldn’t be able to name you Niger’s greatest ever player or a player from Niger full stop, presuming they’re not from Niger or support a team with a Nigerien player. Well, ladies and gentlemen, welcome to Ouwo Maazou. I’d hazard a guess that Maazou is the greatest player Niger have ever had – to play in Europe at least.

Fast and with a superb leap and supreme heading ability, Maazou began his career with Nigerien armed forces club ASFAN, scoring 48 goals in 79 matches. Known for his excellent work-rate and willingness to learn, it wasn’t long before Lokeren took him took him to the Belgian Jupiler League. He will need to continue his goalscoring exploits that saw him finish the fourth in the Belgian Jupiler League with 14 goals in 2009. He scored in both giant-killings of Egypt and South Africa, scoring the winner against the former. He also scored the semi-final winner for Monaco that sent them into the 2010 Coupe da Ligue final. He’s certainly a man for the big occasion and if Niger continue their habit of giant-killing, he will be at the forefront of it.